To celebrate International Women’s Day, the Embassy of China in the Netherlands and China Cultural Center Den Haag hosted a special event about Chinese Kun Opera for a group of international women. The beautiful photo exhibition on Kun Opera will last till the end of March 2018. I was honored to give a special guided tour and like to share a brief overview of Kun Opera with you in this article.

Chinese Kun Opera is one of the oldest and most refined styles of traditional Chinese theatre performed today. It is the origin of all Chinese operas. According to the western and oriental definition of art form, Kun Opera can be seen as a combination of drama, opera, ballet, poetry recital, mime, farce, and more forms of art. Some of these art forms go back to the third century B.C. or even earlier. Kun Opera came into existence when a group of people gathered on the street and started making their own songs and plays. 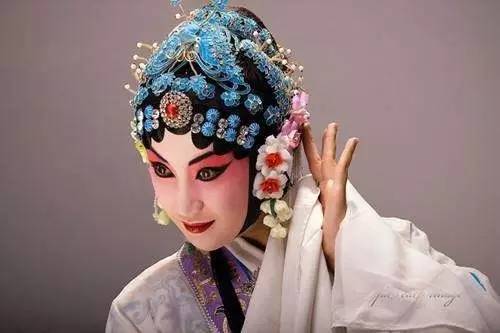 Stylized movement or gestures with an emphasis on elegancy for women

Each word or phrase in an Kun Opera is strictly expressed by a stylized movement or gesture. Even casual gestures must be precisely executed and timed to coordinate with the music and percussion.

Texts, Dance and Music are equally important to the play

In a Kunqu performance, texts, dance and music form three essential medias. They work in harmony to convey the meaning and desired esthetic effect of the playwright. An accomplished Kun Opera performer must master the special styles of singing and dance movement at the same time.

“Kunqu music is based on the “Qupai ” principle. Since Chinese is a tonal language, there is a delicate relation between words and tunes. With a wrong tone, the word means something completely different. Since every word has its own “melody”, and the music parts must be layered on the words, without interfering with it. The libretto must conform to the pattern of the particular “Qupai” in regard to the number of lines, the number of syllables per line, tonal sequence and rhyme.  Only after the main and subordinate Qupai were selected did the author begin to compose the libretto to match the musical structure.”

That is also why Kun Opera playwright is almost always a poet who masters high-level Chinese literatures and poems.

Sheng, Dan, Jing, Chou are the four main types of role in Kun Opera. Dan includes all female roles and Jing is the one which includes the most sophisticated facial make-ups. Each character in the famous play has his own specific make-up. The meanings of the colours are specific in Kun Opera, e.g. red means loyal and white means evil.

Kun Opera has its own music notation method. In general, there are three methods. They are Yuzhu Pu, Yizi Pu and Suoyi Pu. Yizi Pu is easier for the musicians to read than the other two forms. Depending on the the time before or after its standardization by Master Wei Liangfu in the 16th Century, Kun Opera has either five or seven pitches. The later one is very similar to the seven pitches in the modern music world. In these 7 varieties, Kun Opera uses Chi, Gong, Fan, Liu, Wu and Yi (尺、工、凡、六、五、乙) to represent the notes which are corresponding with Do, Re, Mi, Fa, So, La, Si that we know now. (See below picture) It also has other signs such as the inhale sign.

A bit of history

The first trace of Kun Opera goes back to the 14th Century (Yuan Dynasty). The Kunshan (Kun Mountain) area in Suzhou in modern Jiangsu Province is the cradle of Kun Opera. The language used in Kun Opera is neither the dialect from Kunshan nor mandarine. It has its own unique “language”. Master Wei Liangfu standardized Kun Opera’s tunes, tones, rhythms, pronunciations in the 16th century. Then it was possible for this type of regional art form to become a national one. In the following 200 years between Ming Dynasty and Qing Dynasty, Kun Opera became very popular throughout China. And it was loved by some emperor who adopted it into his palace and became the most prestigious drama form in China.

The Kun Opera has suffered a gradual decline since the 18th century because of the high-level technical knowledge it also requires from its audience.  And also because of  the pass-away of talented opera playwright, Kunqu troupes experienced a commercial decline in the late 19th century. With the rise of other operas such as Beijing Opera which also brought in exciting acrobatics, Kun Opera started to loose its ground. The ban of practices of Kun Opera by an emperor from Qing Dynasty made it almost impossible for people to practice or to inheritage it. As a result, it slowly lost its public base as well. In the 20th century, the cultural revolution in China banned all forms of art which made Kun Opera almost went distinction. Thanks to overseas’ Chinese Kun Opera groups and enthusiasts, some Kun Opera pieces and techniques survived.

In the recent 40 years, the rise of “zhe zi xi” (arias/selected scenes) could keep this type of art form alive. Instead of performing the whole piece of one play for multiple days, now the artists can performance one or multiple interesting pieces independently. In 2001, Kun Opera was selected as one out of the ten “Oral and Intangible Heritage of Humanity” of the world by Unesco. The 6 troupes in China and more and more young Kun Opera enthusiasts are joining the force of keeping this art form alive. It is important sources of Chinese history, literature, music and aesthetics for the coming generations to treasure.